Jake is that kid on the playground who waits for others to tell him he can join in the game. Sometimes, it seems it’s much easier for him to be alone in his own world than to talk to others. He definitely doesn’t enjoy talking to people he’s not familiar with. He’s quite talkative at home, though. He also doesn’t enjoy being the center of attention. And when he is, he hesitates to speak up; he tends to mumble and easily gets confused. He’s only comfortable talking about Math because he loves it. For anything else, even if he knows the answer, he seems afraid to say it.

They don’t quite understand why.

Such a little word, a simple and familiar adjective, that carries so much meaning.

Shyness is often linked to anxiety, a lack of confidence, or low social intelligence. It is often connected to those experiences where you might have felt uncomfortable, embarrassed, or socially inadequate. It leads people to avoid situations in which they perceive some sort of a threat.

Many people have unproven but strongly-held theories that shy people don’t have much of a chance of succeeding in life. It seems as though the world favors dynamic extroverts who connect easily with others. Consequently, parents often seek professional help when they feel that their children might be behaving in a way they perceive as shy.

Where does shyness come from?

There are many theories which attempt to explain how shyness develops.

Some argue there is something “built in” that makes us shy and others claim we might have picked it up by watching somebody important to us act in a similar manner. Some might say that we are, from an early age, aware of our shortcomings, which makes us feel insecure in the presence of a group. Generally speaking, “shyness” could denote a feeling of inadequacy in regard to certain expectations (i.e. Everybody is good at sports. I am the only one who’s clumsy).

But we’ll take another path.
Let’s not look at the theories. Let’s focus simply on understanding each child individually.

How not to be supportive

Let’s start with how you certainly won’t show understanding.

Describing your child as shy everywhere you go and interpreting every single behavior that includes withdrawing from the group as shyness won’t help. Also, telling them not to blush every time they do might be a bad idea. Making excuses for them every time they stall, get confused, or refuse to talk to people might not be the best way to support them.

“He takes after his father. He’s not talkative either.” Comparing your child to someone else or speaking about their behavior as if it were a fixed trait isn’t going to be of much use. You want your child to believe they can change something they don’t like about themselves, right? So don’t make them feel they can’t.

Understanding ourselves as parents

Now, here’s how you can help.

Explore why it is that your child might be acting in a way you think of as shy.
Ask yourself the following questions so you can understand better.
It’s important to be aware of your own thoughts and impressions.

(The behavior could be seen a reaction or response to a specific event in the past.)

(It is important to acknowledge our own understanding of the way our child is behaving and what we see as the effects of that behavior.)

(We need to take into consideration the variety of different factors that might be influencing the child to behave that way.)

(Recognizing and understanding your own fears and worries is one of the most important steps.)

(You can try to recognize specific triggers by looking at specific situations.)

(What is it about these situations which differs them from those in which your child is extremely shy?)

(What we say and do has a significant bearing on how our children behave.)

(The response is often a reflection of how the child sees our reaction.)

(“Shyness” is often a learned behavior.)

(How does the world look through the eyes of my child?)

Sometimes, we might be too emotionally invested to be able to answer these questions and reflect upon our answers. But that’s what Coaches are for. The Coaches navigate you through this exploration process with their questions.

Now, all the above questions can be modified to help your child express their perspective, too.

What’s important is to understand that this “shy” voice inside your child, even when it’s quite dominant, is just one of the many voices inside them. Your child might take the lead in some situations, even though in many more they decide to stay on the side. Help your child recognize that part of themselves that keeps them stuck. Look at those situations where you see the same behavior and ask the child what they have in common. It might be that the common denominator is a trigger for that part of you that says “You’re going to embarrass yourself”, “You’ll fail” or “Nobody likes to be around you”. Don’t disregard or ignore that part. Try to understand why it’s there.

Frequently, when we detect a behavior that we “don’t like” to see in our children we try to find ways to eliminate it. However, every single behavior has its own internal logic and a purpose which needs to be understood. Shyness can often protect a child from getting involved in situations where they feel they might get hurt.

Again, our emotional bias sometimes makes this hard to do. We have the impulse to protect our child from feeling bad, which is why, when they share a thought such as “Nobody likes me”, we’ll try to convince them that’s not true. The Coach would continue with questions such as “How do you know that?” or “When did you notice that?”

Suggestions on what to do

Each segment in this section is a suggestion on what you could do.

Understanding is always the first step.

There are specific strategies on how to help a child open up and feel free to explore their actions in everyday situations. Feel free to use whichever seems to make the most sense for your child. 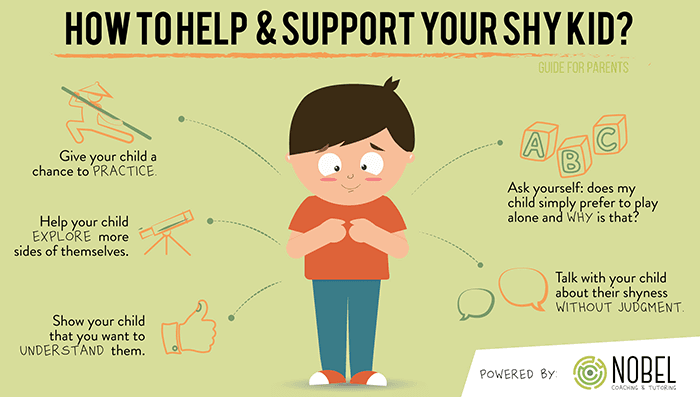 Bear in mind that every child is different.
That is why the path to helping your child is understanding them.

The reasons why somebody acts in a certain way are highly individualized. Don’t generalize.
We attribute so many meanings to that simple adjective  “shy”. Let’s understand those meanings.

If you need any kind of advice related to the social development of your children, you’ve come to the right place!

Our site uses cookies to ensure you get the best experience while browsing it. By continuing to use our site you are agreeing to our Cookies Policy.